The Transnational Dialogues Journal 2014 has been shortlisted for the 11ª Bienal Brasileira de Design Gráfico, which will take place next month in Rio de Janeiro. Parabéns to its fantastic designers, Gabriela Castro and Julia Masagão!

If you have not had the chance to get a hard copy of the journal, you can still access it online in PDF and ISSUU format.

The performance “ROLO” took place within and without the MAXXI Museum in Rome on Sunday 16 November 2014, as part of the final event of Transnational Dialogues 2014.

Many thanks to Emanuela Stramenga (European Alternatives) who guided the performer through the streets of the Flaminio neighborhood, to Irene De Vico and all the curators at MAXXI Museum, and to all the public that confronted the heavy rain of a dark autumn afternoon and followed the performance until the very end.

Wellington Dias is an artist and performer. He is one of the coordinators of Casa Gira Mundo (Lapa, Rio de janeiro) and founder of the Bando Filhotes de Leão (Rio de Janeiro). His project “Tecno Barca”, which took place in the Archipelague of Bailique in the Amazon River, won a Funarte 2011 award and the Premio Samuel Benchimol de Empreendedorismo Consciente 2012.

The events at MAXXI Museum in Rome will take place within the context of the exhibition Open Museum Open City. Artists, curators and researchers  have been specifically invited form Brazil and China to take part in a series of discussions and performances.

Following the two successful Caravans in Brazil (February 2014) and China (May/June 2014), Transnational Dialogues 2014 is staging the final series of events in Europe.

The first part  will take place at MAXXI Museum, Rome, 15-16 November 2014. Artists, curators, intellectuals and many young professionals from the artistic and creative sectors from Europe, China and Brazil will give life to a two-day programme of conferences, video-screenings and art performances. The presence of Transnational Dialogues at MAXXI Museum is part of the exhibition Open Museum, Open City. Full programme and profiles of participants are now available!

The second part will take place at Kreuzberger Pavillon and at SAVVY Contemporary in Berlin, 21-22 November 2014. Again, art performances and discussions will introduce a fresh view on how artists and creatives interact with their surroundings across the three areas. Furthermore, the output originating from the Global Players Residency (Chongqing, June 2014) will be also presented for the first time to the public. Full programme and profiles of participants are now available! 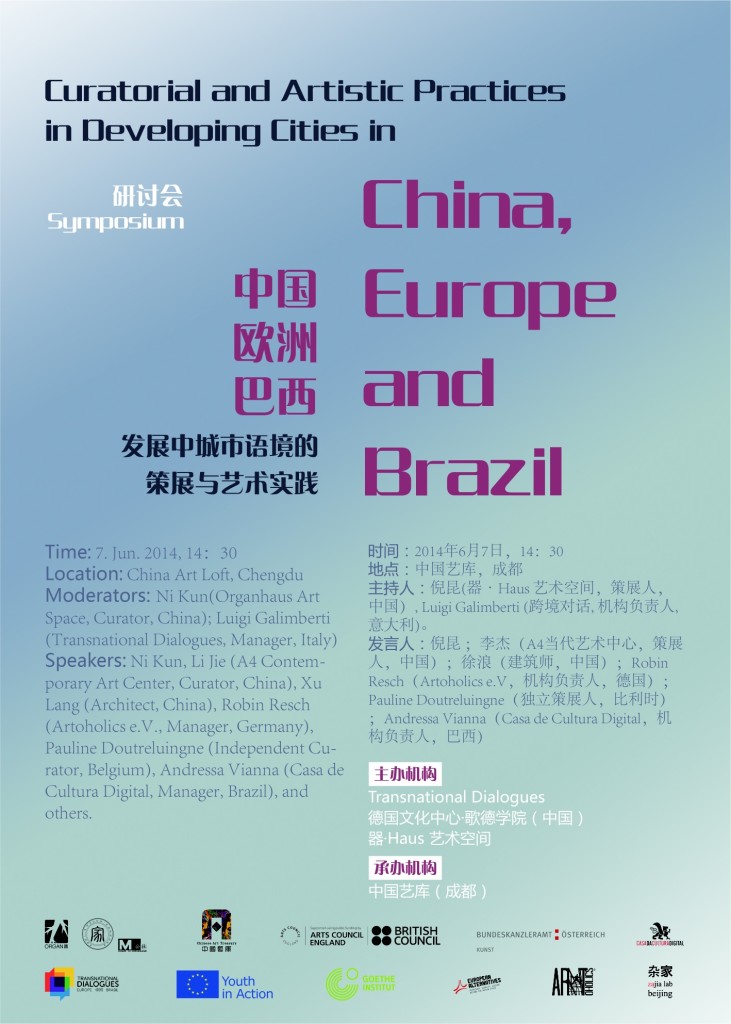 In a few days, about 25 young artists, curators, designers, architects and researchers from all over China, Europe (and Brazil!) will meet in Beijing to take part in the Second Caravan of Transnational Dialogues 2014.

Under the slogan “ChangeUtopia!”, Transnational Dialogues is reflecting on the failure of existing economic and social models in the Europe, China and Brazil, and the role of artists and cultural production in gesturing towards alternative futures. The process is taking the form of a year-long process of networked-production, a multilayered exchange and mix of virtual collaboration, meetings, seminars and caravans.

The Second Caravan will take place in Beijing (30/05-05/06), and Chongqing and Chengdu (05/06-09/06). The programme will be followed by a three-week long artist residency in Chongqing in collaboration with Organhaus and with the support of Goethe-Institut. More information to follow soon.
TD 2014 Brochure (English/Chinese)

Join us for a long afternoon of discussions on “Change Utopia!” at MAC Niteroi, on Friday 21st February, 15H30-19H00. Before the talk starts, you can visit Carlo Vergara’s exhibition Sudario at the presence of the artist.

Protests in Brazil, crisis in Europe, political stagnation in China. Our current social, economic, and cultural models are failing us everywhere. Artists, philosophers, and cultural practitioners have historically been at the heart of a drive to radically critique the present and imagine alternative futures, positing a radical break and fostering new forms of living together and new scales of values. This final event of the Transnational Dialogues Brazil series brings together an international group of artists, theorists, and activists to discuss the role of creativity and the arts in imagining and opening up alternative futures. Session 1: Change Utopia! Brazil, Europe, Russia, and China between global markets and the search for new development models. Session 2: Protest! Politics, Arts, Imagination. Session 3: Spaced out: Cultural policies and urban space

In collaboration with: MAC De Niteroi and Prefeitura de Niteroi

On February 20th (10-12 AM) at Studio-X Rio, Barbara Szaniecki (Italy/Brazil), Ren Han (China), Pedro Rivera (Brazil), Robin Resch (Germany), and others, will discuss on artist interventions and processes of urban regeneration. You are invited to join us in this truly transnational dialogue.

Description
By upgrading its city centre and restructuring the area around Porto Maravilha within the framework of the Olympics 2016, and more generally revitalizing and displacing lower income neighborhoods, Rio applies a narrow planning strategy attempting to boost international investment and augmenting its symbolic capital as a competitive global city. Transnational Dialogues wants to discuss these urban transformation processes within a global perspective. After short inputs on the local situations in Europe and China, the discussion will focus on how artists and activists research, comment and intervene around this ambivalent set of transformation processes.

You are all invited to come and discuss on independent art spaces with contributions from China, Russia and Europe at Casa Do Povo, Sao Paulo, on Tuesday 18th February, 20h00-22h00.

The discussion will depart from an analysis of the Chinese context, in which the market and State – most often materalizing as a single, Leviathan-style, entity – do not leave space for independent creation, in particular when political or social issues are involved. Experiences from all over Europe, China, Russia, and Brazil, will be brought forward with the hope of identifying a transnational resistance against the State-market oppression from artists, intellectuals, but most of all from the people to which art and culture speak to.

Four main public events will  be part of the Brazilian Caravan of Transnational Dialogues 2014. The discussions, held in English and Portuguese and whatever language makes our participants able to communicate with each other, will tackle the issues of art and protests, independent art spaces, governmental policies in the cultural and creative sectors, urban regeneration and more, in a truly transnational perspectives with contributions from artists, curators and researchers from Europe, China and Brazil.

You may download the invitation at the following link:
TD 2014 Brazil – Public Events