Painting and drawing for me is a way to feel connected to the space where I am in, as if it were a reaction to the sensations caused by the context. Thus, it is a great pleasure for me to be able to paint whenever I am passing through new cities, especially when the act of painting is not a solitary observation, but a way to interact with people. I can almost feel to be part of a city, once I can develop an artistic project in it. 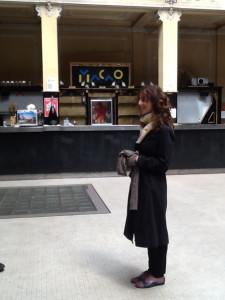 I went to Milan as a quick stop on my way to the Bologna Children’s Book Fair in March, where I would represent Brazil on behalf of a publishing house. One of the coordinators of Transnational Dialogues had arranged meetings for me with local curators and with the organizers of M^C^O, an independent artistic occupation that is located not far away from the city’s centre. After just one hour of talking to one of M^C^O’s members, Corrado, I was invited to stay there for a couple of days in order to develop a site-specific, artistic proposal. 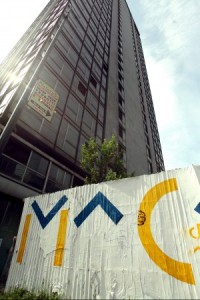 M^C^O‘s story began a couple of years ago, as I was told, by a group of people who were unhappy with the current artistic and political scene in Milan. They started with occupying the Torre Galfa, one of the few Milanese skyscrapers, which has been abandoned for years. After a few days of occupation hundreds of people started to come. People had the feeling that they were part of a major political moment in their city. Dario Fo, who in 1997 won the Nobel Prize in Literature, had also participated, giving legitimacy to the occupation. But it didn’t last long. The occupiers were expelled after 10 days. Then, some of them went to occupy a new building, but in that case the occupation lasted even shorter. Eventually they managed to occupy the place, where they are now. 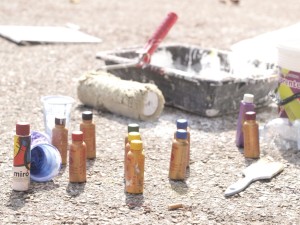 In spite of having such a complicated history, M^C^O kept its primary aim of being a cultural centre for the people. But how to do that without any budget? The work to maintain the building is huge. Still, they managed to build a dance floor for dance classes, they do movie presentations at least once a week, they organize music concerts, theatre plays and workshops. All the activities are for free and people work there on a voluntary basis. Some of the people that I met there were very optimistic about the future of M^C^O’s; others were feeling pretty much delusional. I was told that the project was becoming not enough dynamic to be a real hotspot for artistic creation, due to the need to gather an assembly to discuss any bigger idea, and many people in the assembly had no artistic production at all, therefore in the long term M^C^O would loose its main force: its commitment to be an open art centre. 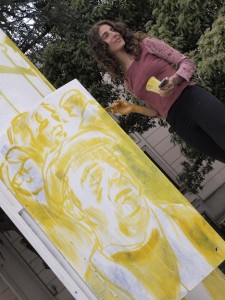 Nevertheless, my participation was very dynamic indeed: I was invited, they offered me a cosy bed to sleep, painting materials, a big range of choice for painting support, lunch, very funny and ritualistic breakfasts, jazz concerts… I just felt I was living happy days. That is why I decided to do a painting that would express rather optimistic feelings. I portrayed my idea of what the first days of M^C^O ‘s assemblies at Torre Galfa could have looked like. I painted two big Dario Fo’s, one for each side of the work. 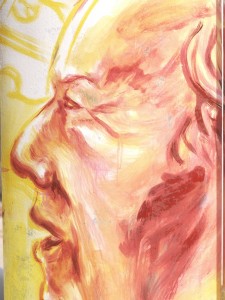 In my work one can see a diverse crowd with musicians, photographers and even cops all gathered in an unidentified space, a background inspired by Via Lincoln, a beautiful but atypical, nearby street. The support for this work is a kind of vertical hollow cylinder, with two small doors, or windows that opened like doors, well, a very particular piece of wood. It is very light and easy to move and use for different events: I imagined they could use it as a cashier for M^C^O’s bar or for performances on the streets. Who knows what they will do with it now!? It was just a great pleasure to be able to paint it. 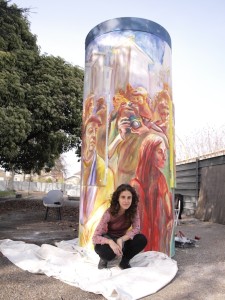 Vanessa Rosa is an artist and illustrator. She took part in the First Caravan of Transnational Dialogues 2014.