IT IS SO MUCH THAT IT DOES NOT FIT IN HERE: That is the sentence written in one of a multitude of posters that were occupying the streets during the mass protests of June 2013 in Brazil. The Brazilian insurgence, the Spanish 15-M and the resistances in the margins of Europe and the world do not fit in an exhibition, but the Brazilian Pavilion at the Venice Biennale has opened itself to the multitudes and has allowed the power of these multitudes to break through it.

A BRECHA DEMOCRATICA could be appropriately defined using the words that Claude Lefort employed to describe the May 1969 in France: “It is an extraordinary movement of collective creation”. However, the rupture of June 2013 was also uniquely Brazilian: the exercise of the right to escape the logics of biopower and the dynamics of war that not only produce segregation, but, above all, rules over the poor between the favelas and the neighbourhoods, between Brazil and the world. It is not by hazard that the metropolitan insurgence has at least three constitutive dimensions: the fight for free transportation and for the mobility across the whole city, which triggered the June 2013 movement; the cry of love against the torture, assassination and disappearance of the worker Amarildo, which took place in a UPP (Pacifying Police Unit) in Rocinha, a favela in Rio de Janeiro, and the request for a politics of security that cannot be mistaken with the practice of the extermination of the poor poor; the exit of the “garis”, the street cleaners, from the senzala (the slaves’ quarters) during the fights in Rio de Janeiro or, in other words, the exit from the forms of representation – from the union to the party – that do not represent anymore their requests, and the creation of new forms of struggle and life, of another city. 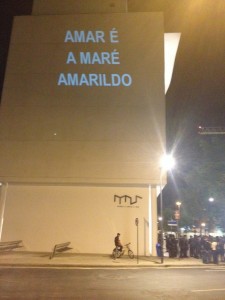 A SONG OF BACK AND FORTH. The June 2013 insurgence came to Brazil from Spain, an “extended Spain”, and went back to Madrid and Barcelona. We need to think BETWEEN Europe and Brazil, BETWEEN north and south. In Europe, the worker became again “precarious and poor”. In Brazil, the poor had always been precarious, and today he has been transformed in a “poor worker”. The European and Brazilian multitudes need to face the challenge of knowing what their power is, so that their power can keep this rupture open. What can we achieve between Spain and Brazil? The real victory of 15-M is in the municipalist movement that became the 25M in Spain with mayors elected in Madrid, Barcelona and elsewhere. The real victory of the Brazilian June 2013 movement is in the fights and in the practices of social coalitions that are beginning to develop in Brazil. Those achievements speak at each other. 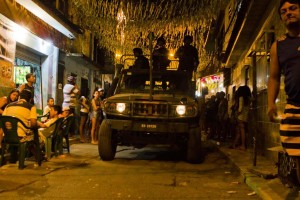 On the other edge of the Mediterranean, the political crackdown operated by the Troika on the Greek government after the resounding “Oxi/No” expressed in the referendum made clear the inherently undemocratic character of the European institutions and turned Greece into a possible a catalyst for a much wider European mobilisation. From precarious and migrant labour in the South of Italy to the Blockupy coalition at the heart of Germany, the continent is shaken by democratic ruptures and refusals to comply with established order.

A brecha democratica gained an aesthetic expression. The events of June 2013 unfolded in a powerful aesthetic experiment. Artists joined activists, countless collectives took shape in their own manifestations, and all this production was itself poetically and politically recorded. Those actions, many of them performative, opened the political imaginary to other forms and contents of the struggle. At the same time that this aesthetic was being formed in the immediate clash of the streets and the networks, the June 2013 movement actualized and activated aesthetics that were less linked to the events, but that were keeping with them indirect relations, forms of politics proposed through the art, within and without the institutions. The aesthetic of politics and the politics of aesthetic also exchange points of view. 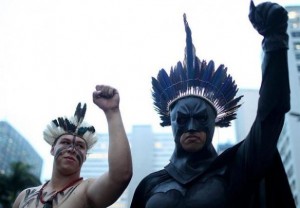 The event “The ‘Brecha Democratica’: Transnational Dialogues”, which will develop across the Brazilian Pavilion, S.a.L.E. Docks and the Biblioteca di Marghera, aims at being the space-time of these exchanges among Brazil, Spain, Serbia, China and… Italy.

This text has been collectively drafted and edited by some of the contributors to this event. All images are taken from the web and are related to the protests of June 2013 in Rio de Janeiro.