In February 2014, a group of artists occupied for artistic proposes an abandoned house belonging to the Federal Government at Consolação in downtown São Paulo. Since the beginning of the occupation several artistic activities and seminars have been taking place at the house, now called Casa Amarela (the Yellow House). Art educator Malu Andrade has interviewed Dorberto Carvalho, one of the leaders of the occupation movement, on how he sees Casa Amarela in the context of other cultural and civil movements that are now taking place in the city. (Click here for the original interview in Portuguese)

Malu Andrade: Could you tell us what is Movimento de Ocupação de Espaços Públicos, Atelies Compartilhados? Who is part of it? When did the movement start?
Dorberto Carvalho: The movement started three years ago. It began with the Cooperativa Paulista de Teatro, a theatre workers’ union, and with theatre collectives, which were born in the context of the Programa municipal de fomento ao teatro and had already occupied some places for artistic production. These collectives had a philosophy, an ideological approach on how to link their artistic production with the city itself and, based on that, the movement was launched. On one hand, we had as reference the experiences of cultural occupations in Europe: East Germany, London and Paris. On the other hand, we had the work developed by theatre collectives in the outskirts of Sao Paulo, which blended theatre practices with other artistic languages, making things much richer than a traditional theatre program. The background of Atelies Compartilhados is therefore a mix of European and local experiences, and we are still discussing what the movement should be. And the interesting thing is, after we occupied the building, new collectives have joined us on this debate, such as the members of Parque Augusta and Buraco da Minhoca. 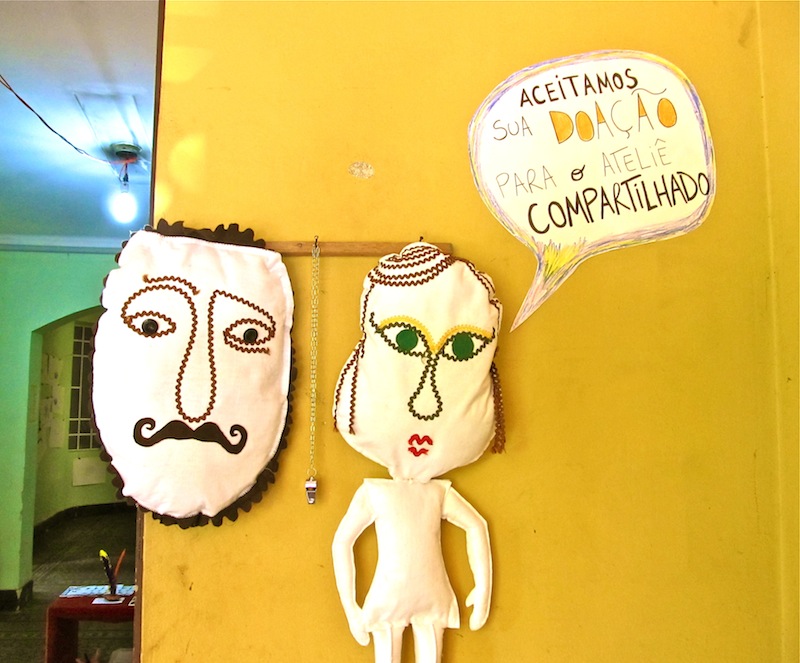 So, is there already a dialogue with other cultural movements, such as Parque Augusta, Baixo Centro Movement, Buraco da Minhoca?
Sure! And also with other movements that started before those you have mentioned and have been working mostly in the outskirts. The difference is that, given our spatial location in the city centre, we naturally get more media coverage and attention: we are in a very privileged area, in the middle of a huge real estate speculation. From Belas Artes Cinema to Roosevelt Square we see other collectives struggling against speculation; the same movements that helped to revitalize this area a few years ago are now being pushed away by the rent prices. And well, Casa Amarela is now in the middle of it, of this cultural and political struggle.

On your website you say something about the Luz area [Luz is a very degraded area in downtown São Paulo, where the infamous Cracolândia is also located], where the Government has created several cultural institutions that, until now, have not been able to establish a dialogue neither with the area nor with the people living there. Do you think Casa Amarela and other collectives could help to change this logic (e.g., by preventing the real estate speculation from progressing further and further)? (Tough job though, since every time you revitalize a place with culture, prices go up and the artists are kicked out). How to resist to that?
I guess we are now in in another stage of this struggle, and Casa Amarela could add another layer to the political and cultural fight for a better city. Not because we are special, but because we are continuing the fight started by others, and we have a long line of previous experiences supporting ours. When we talk about urban “revitalization” – not only in Brazil, but also on global scale – we see that the State is not managing to successfully address the “real” problems. They can’t give real answer to the people; so I think self-managed initiatives created by artists who want to see public spaces occupied by artistic projects have the potential to open up a new debate about the city and to solve concrete problems in a non-institutional way. This is not a new topic but rather a new approach to an old discussion. In reference to the slogan of our current major, “the city that we want”, it is a city with open doors, with spaces of dialogue, with deserted spaces occupied with art. We have mapped some of these places.

You mentioned the “institutional way”. Was this occupation negotiated with the local authorities?
We don’t have a deal with the major but we do have a channel of communication. Isolated, occupied spaces without any political articulation aren’t going to work. We must be one voice despite our ideological differences, because, at the end, we all want the same thing: an open city that embraces all its citizens. The Casa Amarela alone is not going to resist for long, and although I say we must be strong in a political way, the population’s support is much more important, and we are getting it! We have free wi-fi, we have made film projections on buildings walls and we are dialoguing with the surrounding community. We are not the municipal government’s enemy but their partners. We negotiate with them and with the federal Ministry of Culture. Last June we sent a letter to the Minister telling about our intentions regarding this house and asking for permission to occupy it. 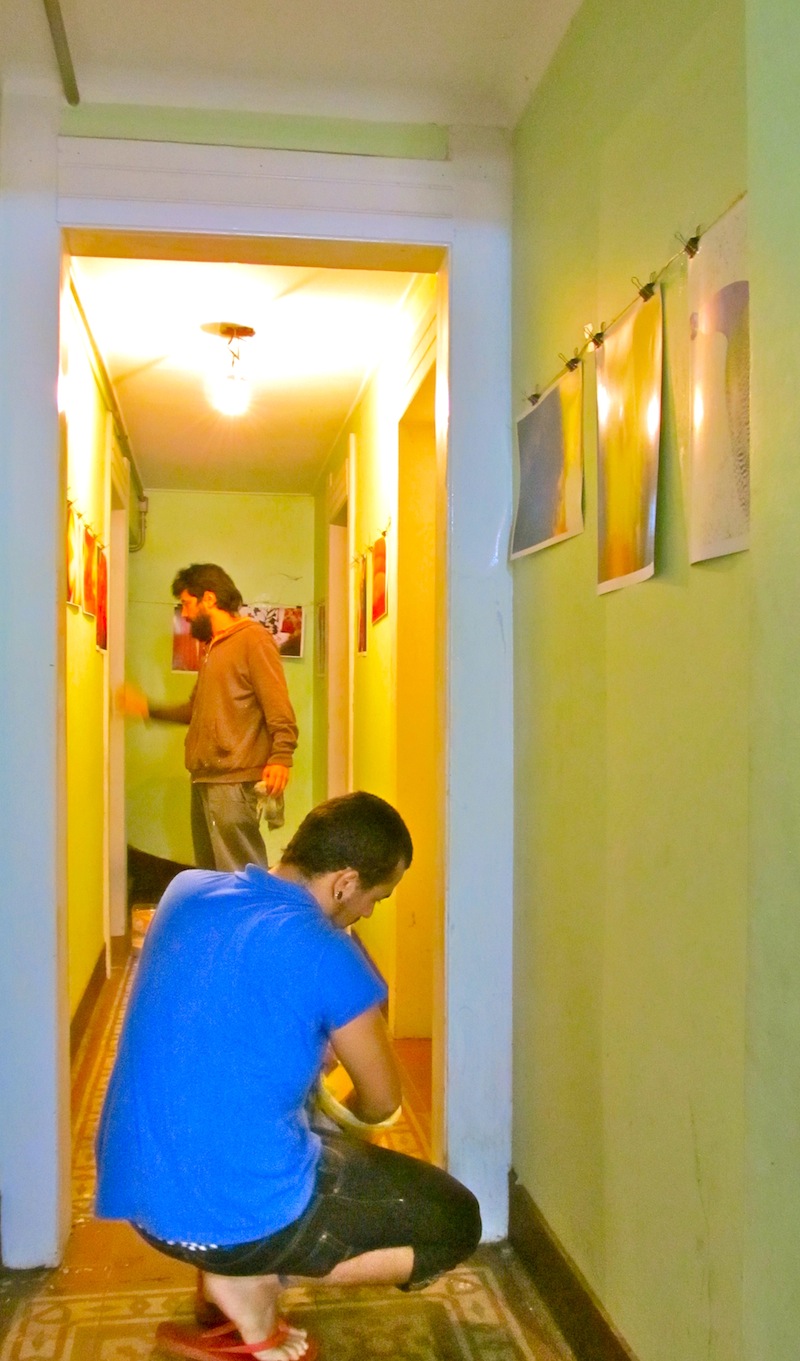 And did you get the permission? Or have you just occupied by your own initiative?
No, we didn’t get the permission. Well, they said they couldn’t let us use the house for free, but what did they expect? To sell a 10 million Reais house to a bunch of artists? Or rent it for 40,000 Reais a month? So we occupied it. The logic is quite different from that of social occupation, although we also dialogue with the social occupation movement and have a good relationship with it. I was myself part of this movement back in the 80’s, but at Casa Amarela we now have other priorities in our agenda. We are an artistic occupation and we respond to other needs and concerns regarding our city.

In Brazil it is quite rare to have a cultural occupation. Are you the first?
We don’t necessarily want to be the first, however if you think about our size and location, we are really the first. We want to open a public debate about cultural occupations, because we won’t survive alone. Our very existence depends on the occupation of other spaces for cultural and artistic proposes. 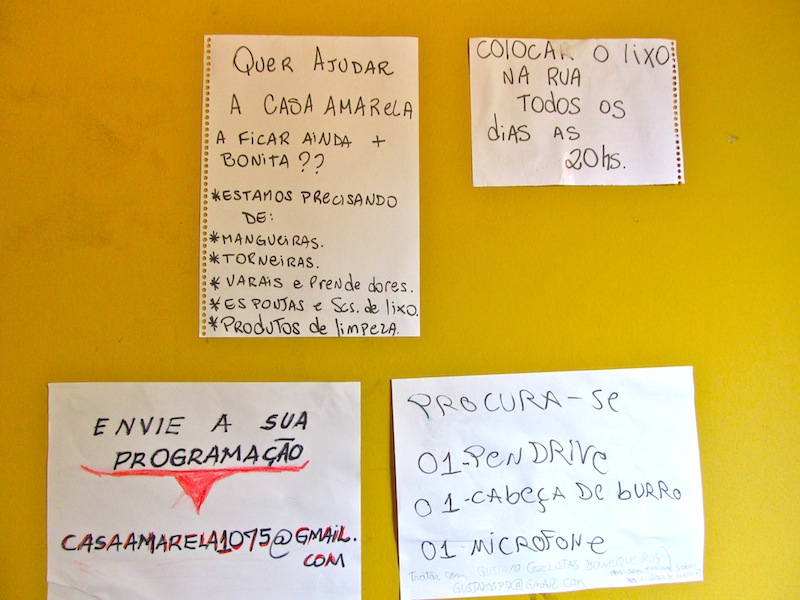 Tell me how does it work to propose activities in Casa Amarela? Anyone can propose?
Yes, but the activities have to be open to all kind of audiences and free of charge. Yet the producers can ask for a voluntary contribution at the end in order to support their projects and the maintenance of the house.