On May 1st, 2013, Chinese and foreign artists joined for a restaging of the Beuys’ performance that took place in Karl‐Marx‐Platz, West Berlin, on May 1st, 1972. An impromptu artistic action touching the issues of labour, migrants, communism and capitalism at the very heart of Beijing has been here documented.

On May 1, 1972, after the Labor Day demonstrations, artist Joseph Beuys was sweeping up the Karl‐Marx‐Platz in West Berlin together with two foreign students. Since then, Beuys was performing socio‐political and ecological actions and interventions in addition to the more elaborate art performances. The cleaning squad from May 1, 1972, only requires a small gesture to make plain what Beuys meant by his extended concept of art. He refers to social differences and to a problem of leftist politics: Those who had to clean up after the Labour Day celebrations and demonstrations were the “guest workers.” Yet, the unions had never done much for the foreign workers who were paid low wages. On the other hand, throughout the 1970s the political Left kept mentioning international solidarity between the lower classes. In this respect, the group of three also achieved some considerable social clearing work. It is no coincidence that the two students and Beuys swept up not only on May 1, but also at Karl‐Marx‐Platz. While Beuys subscribed to Marx’s analysis of the economic relations, he had a different conception of alienation. Beuys shared the view that every form of capital is a form of slavery, but he saw actions as a way out. Moreover, to him every person was a subject and not an object of history. Hence, picking up the broom is a step towards Beuys’s ideal of self‐determination.

On May 1, 2013, Chinese and foreign artists joined for a restaging of Beuys’ performance…

(We copy hereafter a selection from the performance’s manifesto) 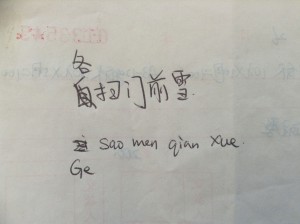 This Chinese expression expresses with a metaphor the shift from Communist times to the current Authoritarian Capitalist one. It is a sentence with a negative connotation for the aged people and a sort of evidence and dilemma for the young ones. 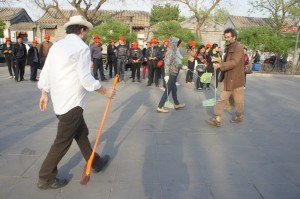 Instead of providing an explanation on the action, we can rely on the multiple associations generated by this possibility and turn them into questions and paths of thought. Does context and time change the meaning of a gesture? Beuys cleaned after the demonstrations; his gesture was a direct critic to any form of capitalism. If we clean without any demonstration having occurred, are we anticipating something? Is there anything interesting in this void, this absence of the previous act? 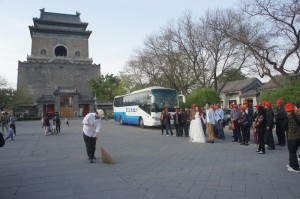 One of the reasons put forward to explain the ongoing renovation of the Gulou‐Junlou area (as a consequence of which all the residents have been evicted) is that Hutongs are dusty, dirty and unhealthy. Generally speaking, the claim for “cleaning” seems to be the current trope in China and all over the globe; from pollution, to corruption, from urbanism to social sphere. But what kind of cleaning? The dust is important; the dust is memory and information, material leftover and testimony. We can share the dust. The dust of our studios, the dust of our walks, the dust of the places where we have been. 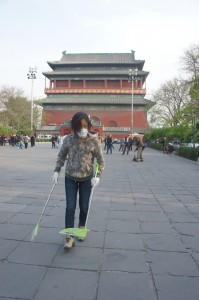 We will collect the dust of this Beijing neighborhood. We will keep some and give some to the observing crowd and to the local residents to think and to remember. This gesture is maybe a mourning, maybe just a physical activity, maybe a service to the community, maybe just a way to be here now and do something, maybe it is something else we will discover later, after we did it. Dust brings all together, doesn’t it? Who can deny it? 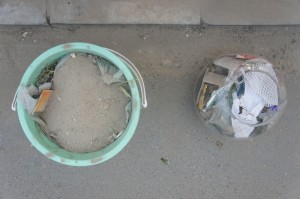